The 45th annual meeting of the Japan Society of Health Information Management (JHIM) was held successfully on the 19th and 20th September, 2019 in Osaka. As health information management began in both Tokyo and Osaka at the same time, Osaka is a historical place for HIM.

Dr. Masanobu Saito, the president of Osaka Minami Medical Center, conducted the Meeting under the theme of “Shoulder responsibility for tomorrow – Information Literacy.” there were 288 speakers, which included 64 students. The number of attendances of the meeting totaled to 421 people. It was the most people ever attended in JHIM’s history. Because there were more registered lectures than ever before, and the topics of lectures by Dr. Masanobu Saito and Dr. Hiroyuki Suenaga, the chairperson of JHIM, were critically relevant to today’s issues, and all themes of lectures were very interesting for HIMs, there were a record number of participants at this forum. The titles of major lectures are listed below.

＊Note: The lecture titles were translated by a writer and they may not necessarily correspond to the exact original titles.

New executive officers were appointed and Dr. Hiroyuki Suenaga was reappointed during the meeting by the new officers. The most excellent paper and the paper offering the most encouragement received awards and were recognized. Furthermore, 5 new leaders of HIM were certified by the Japanese Hospital Association and the number of leaders of HIM increased to 90.

The next JHIM annual meeting is scheduled to be held in Fukuoka, Japan, on the 24th and 25th September, 2020. The meeting will be conducted by Dr. Toru Muranaka, the vice president of Jyunshin Gakuen University, the honorary CEO of National Hospital Organization Kyushu Medical Center, under the theme of “Health Information Management in the era of artificial intelligence – Striving for innovation in the new era”. 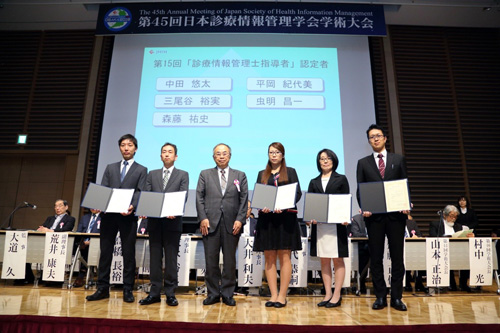 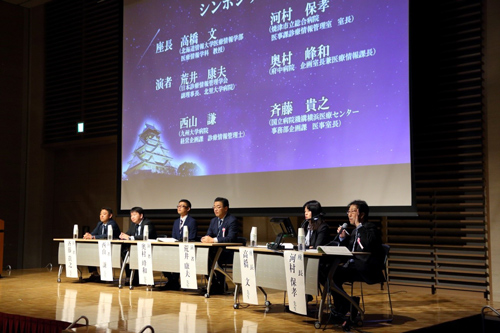 HIMs at the symposium 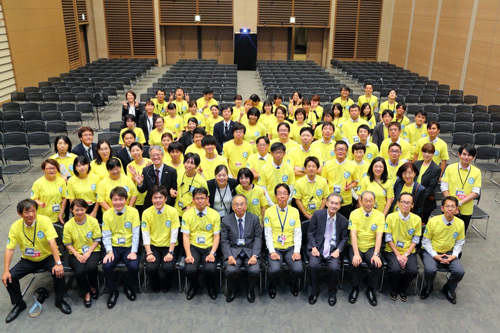 Staff who supported the 45th annual meeting of JHIM