It was the 15th Congress in Korea in 2007 when I participated in the IFHIMA Congress for the first time. Japan Association of Health Information Management (JHIM) enrolled in IFHIMA in 2006, and I attended the General Assembly as National Director. At that period, being engaged in the training of health information managers and operation of JHIM, I always had ardent desire to know how health information management is conducted in other countries. The Congress was a great opportunity, but at the same time, I felt nervous and lonely there, as I was not good at speaking English and couldn’t understand the discussions. However, National Directors were very kind to me. I strongly remember that I felt like a long-time friend during the Congress and was impressed by the greatness of IFHIMA. After the Congress, I began to take a real interest in the current situation of the countries, and in contributing to IFHIMA.

2010－Election of IFHIMA Executive Board

At the 16th Congress in Italy, I dared to stand as a candidate of the Executive Board, with a push from colleagues. Since then, I served two terms on the Executive Board. I experienced further difficulty in English, but thanks to supportive colleagues, I spent very exciting and meaningful years. In addition, it was invaluable experience for me to communicate with the members of the countries in South-East Asia, as the Director of this region.

At the 17th Congress in Canada, Japan stood as a candidate for the host of the 18th Congress. Japan started off at a disadvantage among four candidates, as it was our first time being a candidate, and people thought we would be able to host it any time in the future. Getting the advice from the President of JHIM that I should convey my passion, I gave a presentation in front of the IFHIMA audience, including two minutes speech in English, and we won the bid. The 18th Congress was held in conjunction with the 42nd Annual Meeting of JHIM and the Annual Meeting of the World Health Organization-Family of International Classifications and concluded with great success. I cannot say enough about the Congress, as we had so many unforgettable memories there.

I imagine that it was for the first and perhaps only time for IFHIMA to have a member as Executive Board who speaks through an interpreter. I am not sure I could contribute to IFHIMA, however, I was able to serve two terms as Executive Board, because wonderful colleagues always supported me.

I believe that every member has certain things to contribute to IFHIMA. I do hope that you will start something that you can do for the future IFHIMA and health information management profession and practice. 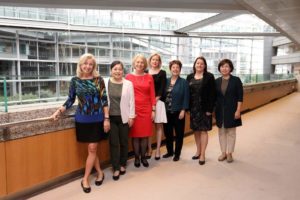