The fact that the health information management (HIM) profession is in a state of transition and technological disruption was an unavoidable message in Miami, FL this year at the American Health Information Management Association’s (AHIMA’s) 90th Annual Convention and Exhibit, which took place September 22 to September 26.

Vision for the Future

AHIMA celebrated its 90th year in existence at the convention—with association leaders emphasizing how the organization owes long-term success to the active role of its members. In her remarks at the convention’s House of Delegates meeting, AHIMA CEO Wylecia Wiggs Harris, PhD, CAE, described AHIMA’s ongoing “strategy reset,” which AHIMA’s Board of Directors has undertaken to build alignment across AHIMA’s strengths and gaps, identify internal roadblocks and external threats, and identify the top strategic priorities that AHIMA will focus on in 2019 and beyond.

“Our desired future state in three years is to be an organization that is in an innovation cycle,” Harris said. “I am a goal-directed individual, I understand the charge that I have been given. We are going to make this pivot.”

Discussions about change and strategy weren’t limited to just HIM and other healthcare professionals who spoke throughout the week. One presentation, given by Sandra Finley, president and CEO of the League of Black Women, was part of a two-day VUCA Leadership Training. VUCA is an acronym used to describe situations or environments that engender volatility, uncertainty, complexity, and ambiguity. This leadership strategy was developed by the US military to teach leaders on how to deal with the chaos of combat in unfamiliar environments.

“In some situations, like the people from AHIMA, they are facing an environment change in the structure of their business,” Finley said in a convention newspaper article covering the event. “Which means in order to do what they want in the furtherance of their careers they are going to have to take a leap that they are not prepared for. VUCA offers that preparation.”

One institute speaker was Iliana Peters, JD, LLM, CISSP, former deputy director for health information privacy at the Department of Health and Human Services’ Office for Civil Rights, and current shareholder, healthcare services, at Polsinelli law firm in Washington, D.C. Peters shared enforcement cases detailing incidents that caused the breach, how the organization handled the risk assessment, and the outcomes of such cases, including associated penalties. Other cybersecurity and cyber threat breakout sessions highlighted processes to avoid attacks, what current threats exist today, and what is anticipated in the future.

Monday’s General Session included a conversation with Delos Cosgrove, MD, former president and CEO of the Cleveland Clinic, who appeared in conversation with Carlos Migoya, president and CEO of Jackson Health System. Cosgrove was president/CEO of the Cleveland Clinic from 2004 to 2017 and under his leadership the organization became a national model of quality, accountability, and patient satisfaction. Trained as a cardiac surgeon, Cosgrove discussed his transition from surgeon to CEO during his presentation.

Cosgrove said he realized he was unprepared to be CEO, so he studied and also put into place structures that would build leadership experience and education for other physicians as well. “Leadership can affect quality. It’s about leading people, not about your resume,” he said. 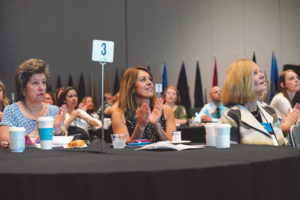 AHIMA Board members Ginna Evans, left, and Valerie Watzlaf applaud a presentation at the House of Delegates. 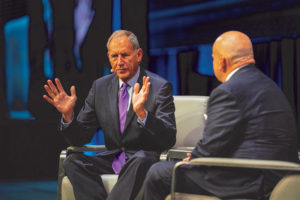 Stories of cyberattacks and ransomware make for a thought-provoking afternoon at the Privacy, Cybersecurity, and Information Governance Institute.